Losing someone is always a tragedy, especially when you hold that person so near and dear to your heart. What’s even worse is loosing someone who chose to take their own life before their time. When an individual decides to take his or her life, they leave so much behind: Their friends, their family, dreams, memories, and so many missed opportunities. Behind they leave so many people left to figure out why this happened, wondering if they played a part in the situation, and retracing their steps to figure out if there was a sign they missed that could have stopped the whole situation. The best advice I could give someone struggling after the lost of a loved one due to suicide is to STOP!!!! STOP holding on to the guilt… STOP questioning what you could have done differently… STOP holding on to the image that you were not enough to keep them here. The moments I battled with suicide and depression went further than any help that anyone could give me. I constantly remember times of my family and my love expressing how much guilt they held onto after my first failed attempt. Nothing I said could convince them that it was not their fault. Even to this day I still have to witness some of them broken and torn because they cannot get over the thought of feeling as if they were to blame. No one should ever have to carry the burden of not being able to save the life of the one that you love. Speaking on experience, battling depression was so severe for me that there was nothing anyone could do to help me. Many times I have sat down with my family to explain that the attempts on my life were never due to their actions, but a struggle within myself. Even after, there were still lingering emotions of believing that they could have done something different. STOP!! Holding onto that guilt and constantly trying to find an answer to such a tragedy is only going to destroy you. It will take over your thoughts daily, and eventually send you down that same depression. Even though it’s hard, sometimes you just have to let go of that final dark image you were left with, and remember all the good that came before it. Instead of holding onto the feeling of thinking they passed away lost and alone, try to create an image of that person finally finding peace. Instead of holding onto the thought of being the blame, hold onto the memories of when you made them the happiest. When you made them smile, or made them feel loved. Most importantly, Stop holding on to the thought of what you could have done differently. Hold on to and cherish all the times you shared, you loved, you smiled, you cried, adventures, and experiences. When you hold onto the negative thoughts of loosing someone, it takes away the value of the best memories you have of that person. Know that this tragic end was not who that person was. The life they lived and the moments they shared is what truly made that person.
I’m pretty sure many people reading this story is thinking “it’s easier said than done.” And to be honest, it is. But there are so many ways to cope, and so much support out here for those struggling to make it through. Joining a support group could possibly the best thing you could ever do to help heal. Being around those in your same situation allows you to gain so much wisdom in learning to move forward. Seeing that there are so many just like you can give you so much comfort and advice better than anyone who has never experienced such tragedy.
The best thing you could ever do after loosing someone you love to suicide, is to honor that person. Keep their memory alive, and tell as many people as possible what was so special about that person. Never let their death be in vain. On October 25, 2014 I was able to attend the very special “Out Of The Darkness Walk” with my family. It was a walk to remember those lost to suicide, to honor and support those who are still here fighting to overcome, and most importantly raise awareness on Mental Illness. A moment that stood out to me the most was a board that held the pictures and memories of those lost to suicide, and the families of the victims standing around it. To see those people still standing strong after going through such a horrible moment allowed me to gain so much respect, admiration, and validation that anyone could overcome such a tragedy. To see a man walking holding a picture of his son while touching every piece of nature he walked pass showed just how much he still carries his son in his heart. That’s how it should always be. To know that your loved one is still walking by your side and still living through everything around you.
Together we can help each other Heal! Together we can make each other Stronger! 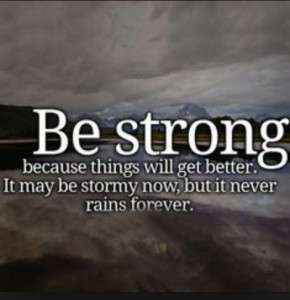 61 thoughts on “Together We Can Heal”